The video, which has circulated on Facebook, shows a girl sitting in the backseat of a car with two men. The girl, who has dark circles under her eyes, stares silently at the camera with her head tilted as the men speak to each other.

Tina Storz, a private investigator who has been searching for Compton for years, said that the girl strongly resembles Compton but could not confirm it’s her. She said she has alerted local authorities and is trying to find out who posted the video.

A woman posted an Instagram video later Thursday claiming that she’s the one in the video. She said she doesn’t know who Compton is and that her eyes were bruised in a robbery. There were reports that the woman’s family reported her missing in southern California, but she says in the video that she’s “fine.”

Authorities had not commented on her response.

Stuttgart police said Thursday that they had received dozens of calls about the video. Chief Mark Duke said in a statement: “We have investigators working on this right now and can’t release any other information right now.” He said Arkansas State Police are involved. 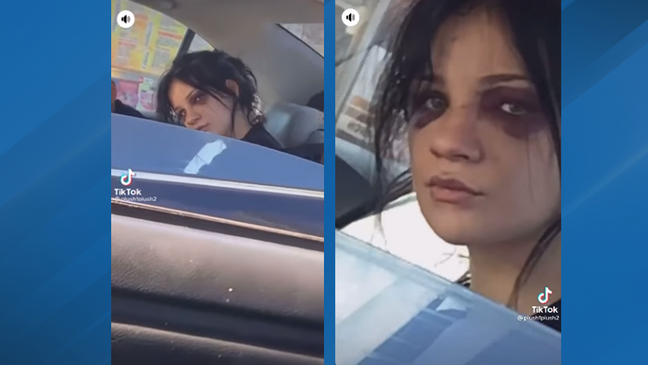 Stills from a TikTok video that are authorities are investigating in the disappearance of Arkansas girl Cassie Compton (Photos: TikTok)

The FBI’s Little Rock field office said in a statement that it’s aware of the video.

“We are following up on the video and taking all investigative steps, but we cannot say anything further at this time,” the agency said.

Efforts to contact Judy Compton, the girl’s mother, were not successful Thursday morning.

Compton went missing in 2014 when she was 15 years old. The day of her disappearance, she went to a demolition derby in Dewitt with a family friend and returned home just before 7 p.m. She left a few minutes later and hasn’t been seen since.

No charges have been filed in her disappearance. Duke said in an interview in 2019 that police had not ruled out any suspects. Judy Compton has said she suspects foul play.